i me am Punjabi! 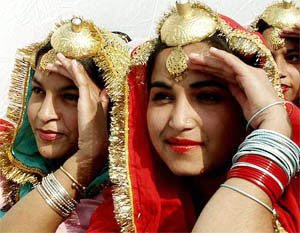 in India traditionally, one is known by the region one belongs to. it defines the culture, language, customs etc. of that particular community (there is also religion and caste but i'm not going to delve into that :). going by this, i am a Punjabi.

Punjab (From Persian-meaning Land of Five Rivers) has a long history and rich cultural heritage.The area that is now known as the Greater Punjab was a location comprised of vast territories of eastern Pakistan and northern western India. It comprised, in its original sense, regions extending from Swat/Kabul in the west Delhi in the east i.e the area including parts of Afganistan and the plains up to the Ganges. It was a centre of the prehistoric Indus Valley civilization and after c. 1500 BCE the site of early Aryan settlements. The region, populated by Indo- Aryan speaking peoples, has been ruled by many different empires and ethnic groups, including Hindus, Jains, Buddhists, ancient Macedonins, Persians, Arabs, Turks, Mughals, Afgans, Balochis, Sikhs and British.

In 1947, it was partitioned between British India's successor states with the bulk (4 out of the 5 rivers) going to Pakistan and the remaining river was alloted to India.
The Pakistani Punjab now comprises the majority of the region together with the Hazara region of the North-West Frontier Province and Azad Kashmir. The Indian Punjab has been further sub-divided into the modern Indian states of Punjab Haryana, Himachal Pradesh and Delhi (my home). Besides the Indian Punjab, the region also includes the areas of Jammu region and Himachal and Haryana states of India that were created out of East Punjab in 1966. Punjabi is spoken by 92.2% of the population in Indian Punjab. The capital city of undivided Punjab was Lahore, which now sits close to the partition line as the capital of West Punjab. Indian Punjab has as its capital the city of Chandigarh. Indian Punjab uses the Gurmukhi script, while Pakistani Punjab uses the Shahmukhi script.
i can go on and on (thanks to wikipedia) there is so much more i wish to share about Punjab here, as this is where i come from and to a great extent it makes me (if you would like to read more you can here).
Text via Wikipedia
women performing the folk songs and dances, Punjabi Giddha. 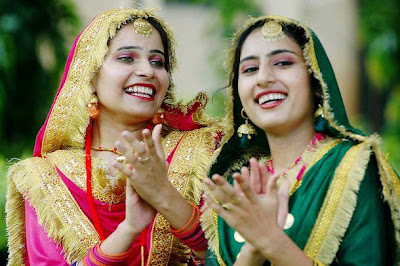 the traditional punjabi female attire consists of a salwar(stitched drawstrings)/ghaghra(long skirt) along with a long tunic like shirt called the kameez and a duppatta that is used to cover the head but now mostly rests on the shoulders. so this is how i got talking about Punjab as i wanted to do a post on the costumes and textiles of india. what better than to start with textiles that come from my community? 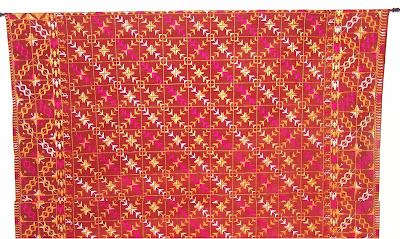 these are some examples of Phulkari Embroidery of Punjab, traditionally used for Dupattas, extensively used at the time of marriages. women used to embroider the phulkaris for their own use and not for sale.
the term Phulkari literally means flower-phul kari-work. some say that this kind of embroidery came to us from Persia where it is called Gulkari (again Gul meaning flowers). the thread used is untwisted silk filament yarn with mostly geometric shapes depicting everyday life, gardens in bloom etc. using the darn stitch. the fully covered patterns are called Bagh (garden). 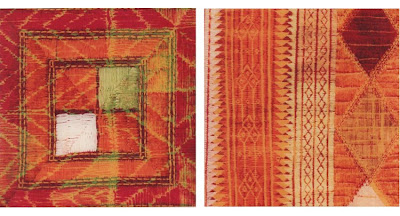 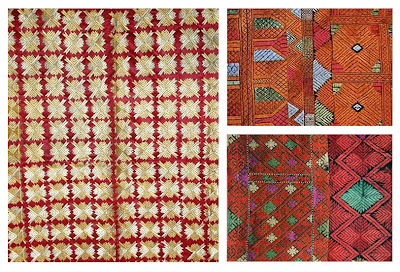 i'll be posting next about the panja durries from Punjab.. so stay tuned:)

P.S. click on John Robshaw on you right (under My Favourite Sites) for stunning examples of contemporary Phulkari used in bed linen!

Email ThisBlogThis!Share to TwitterShare to FacebookShare to Pinterest
Labels: India, textiles of india

Wadiya ji tussi sunao?
Thanks lucky for so much love..i see you've left a comment on a lot of my posts. i plan to check out your blog today! how did u land on my blog btw?