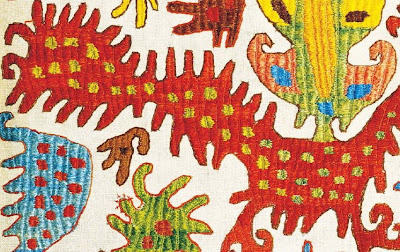 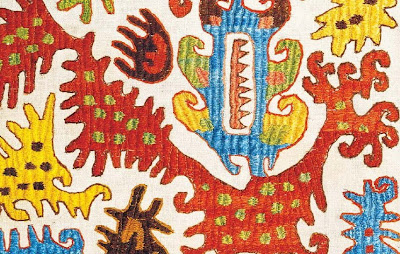 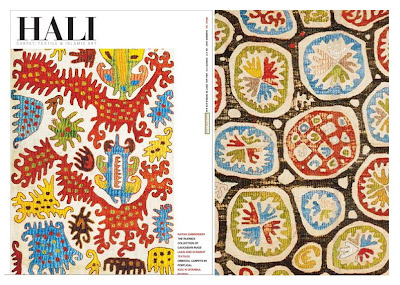 i'm falling in love with textiles from Central Asia. images above are Kaitag Embroideries from the remote mountainous region of Daghestan. image on the cover of Hali magazine, 2007, is Silk on Cotton, 18th Century.
via stylecourt
KAITAG ART
Situated between the Black Sea and the Caspian Sea, Daghestan is an inaccessible and mountainous part of the Caucasus, an autonomous region first of the Soviet Union and now of Russia, flanked by the mighty Russian and Persian empires. Kaitag art, from a small region in the south of Daghestan, is the creation of a multi-ethnic people, incorporating Zoroastrian, Muslim, Christian, Jewish and pagan symbolism. This remarkably vibrant and beautiful tradition is found mostly in the rectangular panels embroidered with vividly coloured silks that are the subject of this book. Examples are attributed to the 16th through to the 19th centuries. The geography of the region and the self-contained and inward-looking pattern of living of the Kaitag people were major factors in the confinement of such a distinct art to such a small group of villages.
THE DESIGNS
The vast repertoire of designs is the legacy of the society that produced them. Byzantine, Fatimid, Mongolian, Timurid, Mamluk, Chinese, Ottoman and Celtic forms, combined with local animist art in a glorious diversity: hieroglyphic motifs, sun signs, birds signs, sun bursts, octagons, cosmic columns, horns, crosses, fantastic crab-like beasts, elk, reindeer, fat swordfish, dragons, amoebae-like shapes, masks and even foetuses can be identified. Many ancient talismanic symbols occur, for these panels were used in rituals associated with birth, marriage and death - to wrap cradles or as dowry covers, for example.
text via textileart.com
Posted by Unknown at Saturday, August 30, 2008