i had a great start to my day today..i got back to being friends with neha paul..yes i have always addressed her by her full name..since school..even when i was in class V.

so this is how the story goes..
we met when we were both in class V and were friendly from the start..(thats what i think maybe neha has a different take on it..i was known to be a snob then), but its only after class VII - VIII that we became great friends...i mean inseparable.
we lived not so far away from each other's house and so i was forever being picked up and dropped off by her mom and dad..we went to art events, craft melas, competitions..i mean i always went with her and her family (i grew up with working parents both of them..thank you)

i'd stay many a nights at her house...and watch her fight with her kid sister all the time..i mean they just won't get along and i'd think how nice it is to have a younger sister (i have an older brother who's only job was to complain to my mom about me).
we both wanted to grow up to be fashion designers (and then i thought i wanted to be a journalist and then a graphic designer and then i thought i wanted to be an anthropologist and then i got back to being a designer..by now i was unsure as to what kind of designer..thought i'd try out design school..got in..i was lucky...it gave me a year to decide and finally i went on to become a textile designer..oho..why i took up textiles is a new post..that i'll talk about later)!

all illustrations of muffin by http://niffum.blogspot.com
sorry..where was i? haan back to the story..
then we grew up she switched schools in class XI and then a year later her family moved to US and we became from best friends to only friends and then to acquaintances.
i didn't even know that she is getting married this year..how her family is, what her kid sister is up to, that she is now studying law....nothing. all because i didn't care. sure she's on my facebook friend list but i think she realised much before me that i didn't care to find out about her and so she stopped responding to my occasional message on her facebook wall.
i was on my own ego trip. kept thinking that she's being a baby, that friends don't stop being friends if they don't call or see each other often. i thought that friends remain friends even if i talk to them once in six months..or in neha's case once in a year (i only called to wish her on her birthday).
i still believe somewhat in the fact that friends remain friends no matter how much time passes, but i know now how hurtful my attitude can be. i have grown up to be a casual, uncaring, selfish person. i know if i want to keep my friendships alive i will have to change that. 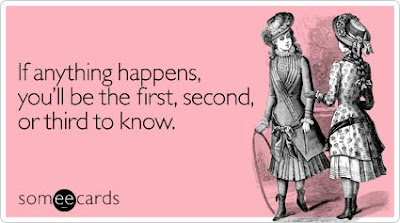 i wish to tell all my friends.. Neha Paul (you'll always be addressed like that), Jasmine, Lima, Manju, Divya, Neha Gupta(now Khorwal:), Vivek(!!;), Pulkit, Anuj, Ravi, Amrita Bhui, Shivangi, Sudhir..and all of you..(please don't kill me if i have missed your name) I VALUE YOUR FRIENDSHIP..i am a richer person because of you.. thank you for the labor you have put in to bear with me and to keep the friendship alive..i never ever want to lose YOU! sigh.
Posted by Unknown at Friday, February 20, 2009

Email ThisBlogThis!Share to TwitterShare to FacebookShare to Pinterest
Labels: i think

I love u too.. and always will no matter what!!

am so glad we are friends and will remain so.

which neha is this? u have to specify surnames!

its me!!! neha gupta khorwal.. btw i went thru all ur feb blogs n i m a big fan of urs!!!its so inspirational n amazing!!! Cheeersxxx

fantastic post, and a great self analisys and growth! you are in the wright path!

Hi Kanika! Can't wait to see your Ganesha idols. Thanks for the participation. Love.d.

I simply loved your story...